Customer satisfaction is everything to us. Read how our customers
have used our services to solve their challenges.
Back

Outotec is constantly developing its head office facilities to better meet the requirements of work. With sensors, facility management has reached a new level – a heaven for facility management. Employees, too, are benefiting from the sensors. 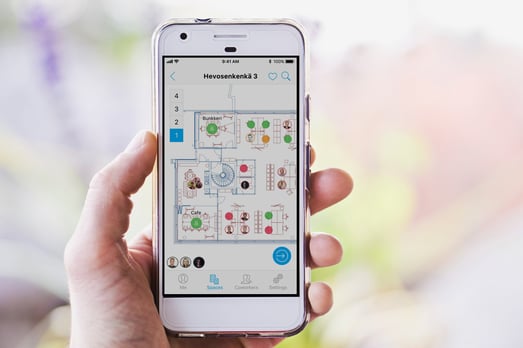 Optimaze Worksense provides up-to-date information on the premises, enabling efficient and appropriate use of an activity-based office. Image: Rapal

A dozen years ago, Outotec's headquarters had cubicles and an open-plan office environment, with the available space being approximately 40 square meters per person. Erkko Malinen, Senior Manager, Facility & Premises Services at Outotec, looks back on those times: “For space management, it was a challenging starting point, but it provided a good basis for developing the working area. We used the old office as our playground and tested things that were new at the time, such as phone booths, ad-hoc meeting rooms and quiet rooms."

At the same time, Outotec started using the Optimaze software, which provided the company with an overview of the premises and the location of employees.

Moving to flexible premises paid off

In 2012, a suitable new location for the head office was found in Matinkylä, Espoo. The agreement on the new premises was made flexible with the option of scaling the number of square meters up or down as required.

"Our starting point was that we needed space for 500 employees, but we also had to be prepared for 1,500 employees. The scalability requirement was huge,” says Malinen.

"In 2014, when moving to a new office, there was a moment when it felt like the premises are now ready. However, our need for space decreased after the move, and we decided to use the flexibility option in the facility agreement to create more compact premises. There was, of course, no point in paying for the empty space,” says Malinen.

In spring 2017, the space usage efficiency at the head office had improved from the 40 square meters at the old headquarters to 15 square meters per employee.

However, according to Malinen, the low utilization rate was conspicuous. “We estimated that more than 30% of work seats were free, but business units did not agree. We contacted Rapal for help so that they could tell us what the actual utilization rate was.”

In May 2017, Rapal carried out a two-week measurement using the Optimaze Measure observation tool, and the result was that the utilization rate was 45%. It was again time for change.

Time for more changes and an even better working environment

Outotec’s management was ready for change, as there was obvious potential for savings, but involving the employees in the change was more challenging. However, some of the cost savings were used to create an even better working environment, says Malinen. “We worked hard to involve our employees, organized dozens of workshops and collected feedback. We also reverted to the ideas generated at our old playground. We had entered the world of Office 365, and meetings were held through Skype, so we needed more phone booths that could accommodate one or two persons. In addition, we introduced so-called working lounges enabling casual meetings.”

The changes in the facilities enabled Outotec to achieve the planned cost savings. Space usage efficiency increased to the current 11.4 square meters per person. Malinen is pleased but thinks that the premises can still be improved further: “We are still not cramped here. Our maximum utilization rate is 65%, which means that in principle there is still plenty of room for growth.”

The introduction of shared work seats provides additional potential for creating more compact premises. “Business lines have been tasked with defining, for each home base, the persons for whom a so-called flexible profile, meaning a shared work seat, would be appropriate and the persons who need a fixed work desk. Approximately half of the employees are currently under the flexible profile, but the number is gradually increasing as employees are voluntarily giving up their designated seats.”

Sensors respond to the requirements of activity-based offices

Changes in the working environment and work have changed the requirements for space management. With the transfer to the activity-based office model, the facility unit wanted to help employees find free desks, meeting rooms and phone booths. In addition, they wanted to even out the major differences in utilization rates. Some home bases were completely full, while others had plenty of space available.

In spring 2018, Outotec deployed Rapal’s Optimaze Worksense software and the related IoT sensors, which monitor, for example, movement and air quality. Over one thousand sensors were installed under desks, in meeting rooms and in the phone booths supplied by Framery. “The sensors were a cause of concern related to the tracking of our employees, even though the system doesn’t even allow us to export data concerning individual persons. Our objective is to keep the premises organized and create added value for our employees by providing up-to-date information on the premises. Emphasizing this message has paid off,” says Malinen.

Six months after the deployment, Malinen is pleased. “Space management was taken to a new level after the sensors were installed in the premises. This is Heaven for facility managers, and many challenges have been overcome.”

Malinen gives an example: "One business leader was concerned about finding space for about a hundred new project employees. Together we toured our premises and all work seats seemed to be in use or at least reserved.” However, Malinen knew that the sensor measurements indicated low utilization rates.

“I asked Rapal’s expert to generate a report based on Worksense data to see how many work seats had actually been used by someone during the working day, as it was not possible to know this based solely on visual observation.”

“That very same day, I received a report which stated that the space had 200 empty chairs every day. Previously, we would have rented more space, but now only minor arrangements were required to accommodate employees using the existing work seats,” says Malinen contently.

The sky is the limit in sensor utilization

Outotec has a lot of ideas and is working with Rapal on development projects to utilize the sensors further. Malinen provides a few examples: "In our opinion, Office 365 integration would be one of the key development areas. Office 365 allows you to reserve meeting rooms directly through the Worksense floor plan. Integration would make it possible to see an employee’s status and location information, which means that in practice you could see where employees are and whether they are available.”

“I see limitless possibilities with the integration to the building automation system. In this case, the sensors already installed in buildings could be utilized through Worksense, including parking spaces in the garage.”

In real estate services, the utilization rate data Worksense provides can be used to allocate resources appropriately. "When the cleaning staff start their shift, they can check the utilization rate information on the floor plan to see which locations need cleaning the most and start there. The objective is not to cut costs but to improve quality. Based on the information, cleaning resources can also be increased – as we have already done with the money saved from reduced leasing costs for facilities. In addition, we will introduce a service call feature, which will enable employees to create a service request immediately when they notice any issues on the premises.”

“How were we able to manage facilities at all before we had sensors?” Malinen asks with a laugh.